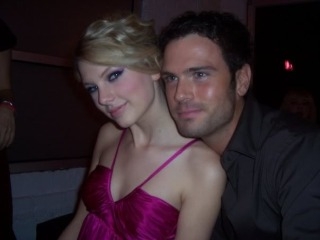 Taylor with Chuck Wicks at her 18th birthday party. He's a country singer who was just starting out at the time and I think he looks like the guy from her Love story music video which makes me wonder if he's the guy she almost dated around that time that inspired Love story. She said she was 17 at the time but this could've been in between when she wrote that and White horse (not to mention Tell me why which was already written by this time but still this could be when he was acting like a jerk but she was still considering dating him) that she supposedly wrote just weeks later after it didn't work out. I've seen a picture of him with Kellie Pickler though too and they definitely looked like they were dating so maybe he was just there with her? I don't think she'd date him after he ended up being a creep but maybe she dated him first and was one of the people who warned her about him. I didn't think the guy was famous but he wasn't that famous yet at the time so that could be why no one ever figured it out and his first single was called "Stealing Cinderella" which could be why she said he reminded her of prince charming and fairytales. Plus he's very cute and prince like so I think I could be onto something.