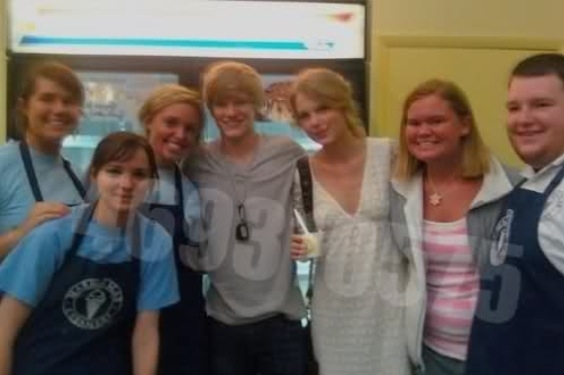 Taylor and Lucas Till posing with fans. This was probably around the time they were supposedly dating. I don't think he inspired any songs but they probably did go on a couple dates because they were seen together a lot around that time (he even went to one of her concerts once) and he admitted to having a crush on her, thinking she was a better kisser than Miley and going out with her but he said he thinks it didn't work out because they were too nice to each other. Maybe he inspired a song like Mine or something and we just don't know it. haha

Grace says...
Yeah he said they did go on a couple dates but were never close to an actual couple.


Yeah, and she says if she goes out with someone once or twice and they don't click she doesn't even bother writing a song about that because it doesn't matter in the emotional grand scheme of things so even if they did go out on a couple dates (which I'm assuming he wouldn't lie about) he was never officially her boyfriend and he likely didn't inspire any songs. I actually think it may that random fan she met while looking at colleges with Austin that summer that inspired Mine. She said she thought he was cute because he looked like Denny from Grey's anatomy so when she finally got to the end of the line of fans to sign something for him and get a picture or whatever she said they got to talking and kind of had a connection so she wrote her number on his hand but then was too scared to go through with actually dating him because after she thought about it she was like "You just wrote your number on some random guy's hand who you just met. Get a hold of yourself!" so I wonder if maybe she did go on a date with him once (he was in college) and he put his arm around her by the lake near her house where she still lived at the time with her parents. It just makes a lot of sense to me because I have a feeling that guy's not famous by the way she describes him in the song. Too bad no one knows what he looks like or who he is! As far as Lucas goes though maybe he was the other guy she mentioned going out with in Haunted who made her smile but couldn't make her forget about Joe (who I can only assume the song is about). I had always assumed she was referring to Taylor but he was quite a while later and it makes sense if she couldn't forget about Joe when she was with him why it wouldn't have worked out. Who knows though!